Operndorf Afrika will be awarded with the Karlheinz Böhm Price 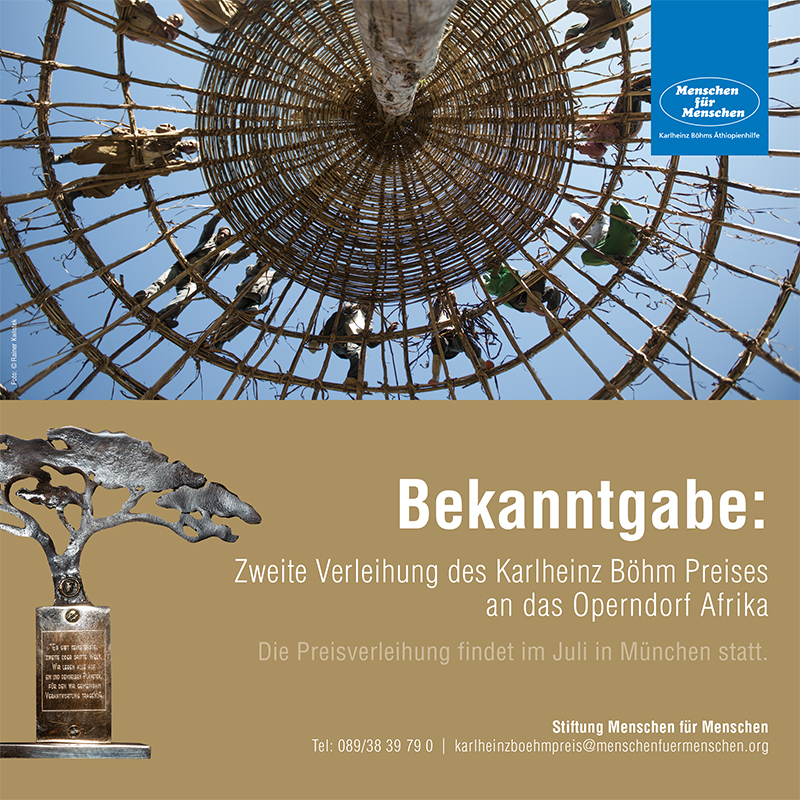 We are very happy to be awarded with the Karlheinz Böhm Prize of the Stiftung Menschen für Menschen this year.

Karlheinz Böhm Preis, awarded for the second time, is devoted to the actor Karlheinz Böhm. In 1981, Böhm bet in the german television show Wetten, dass…? that “not even each third viewer would give one German mark, one Suisse franc or seven Austrian schillings to help the people in the Sahel region.” The actor collected about 8,4 million schillings that could form the basic stock for the organisation Menschen für Menschen – Karlheinz Böhms Äthiopienhilfe. Böhm’s motto “aid for self-development” reflects the sustainable work which focuses on the population’s concrete needs. The long-term projects in the areas agriculture, water, education, health and income aim to empower local people to promote their and the region’s development. This fulfils Böhm’s wish “one day not to be needed anymore”. Menschen für Menschen projects are realised in close cooperation with the population and regional authorities. After completion of the project, its responsibility is transferred to the local administrations. Out of 20 project regions in Ethiopia, in already nine regions the population could take over the full responsibility. The Karlheinz Böhm Award honours individuals and organisations for their sustained commitment in Africa. The award was given to the former Federal President of Germany Horst Köhler in 2016 for the first time.

The award ceremony will take place on 21.07.2018 at the Literaturhaus in Munich.