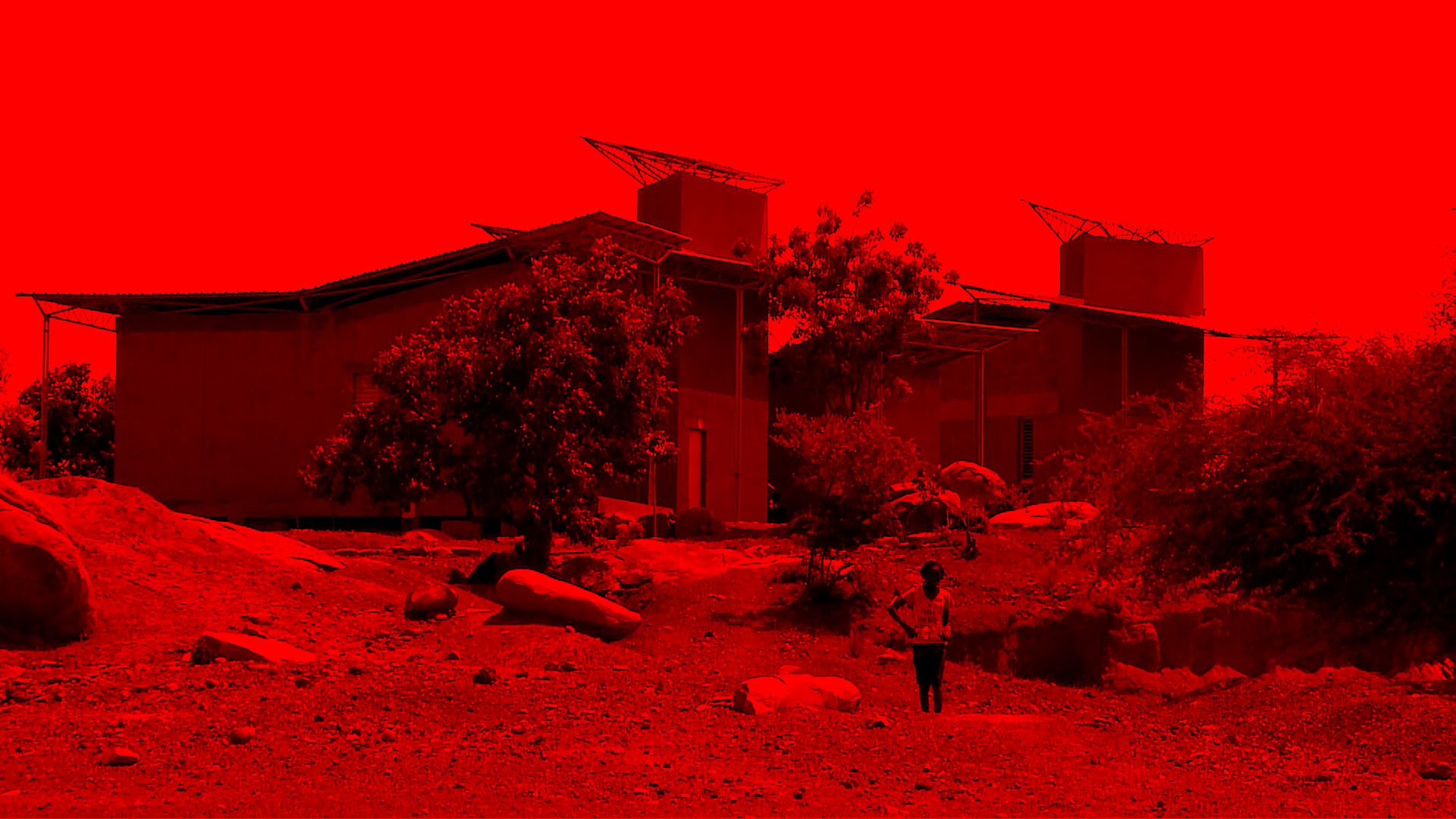 The artistic focus
The main focus 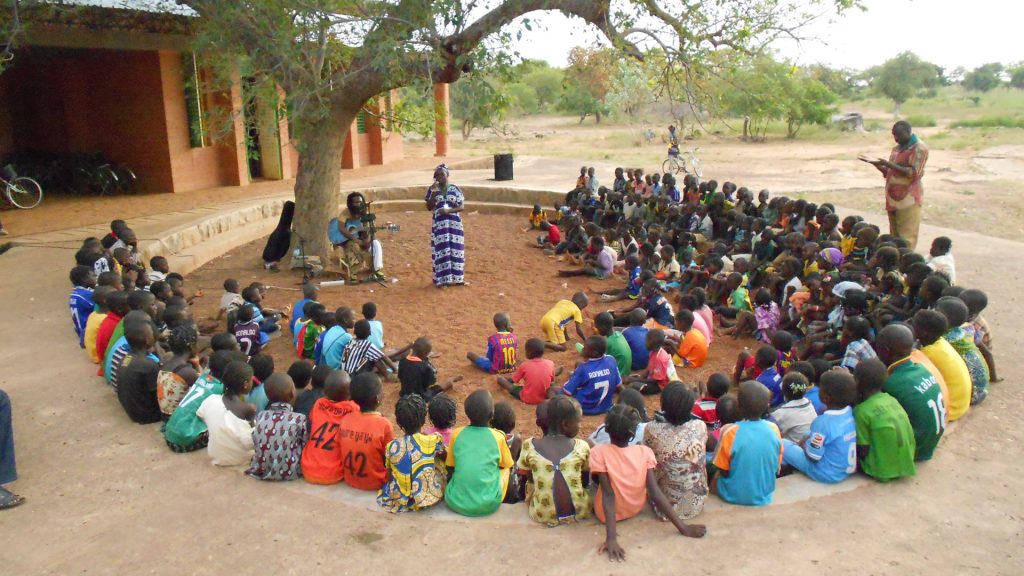 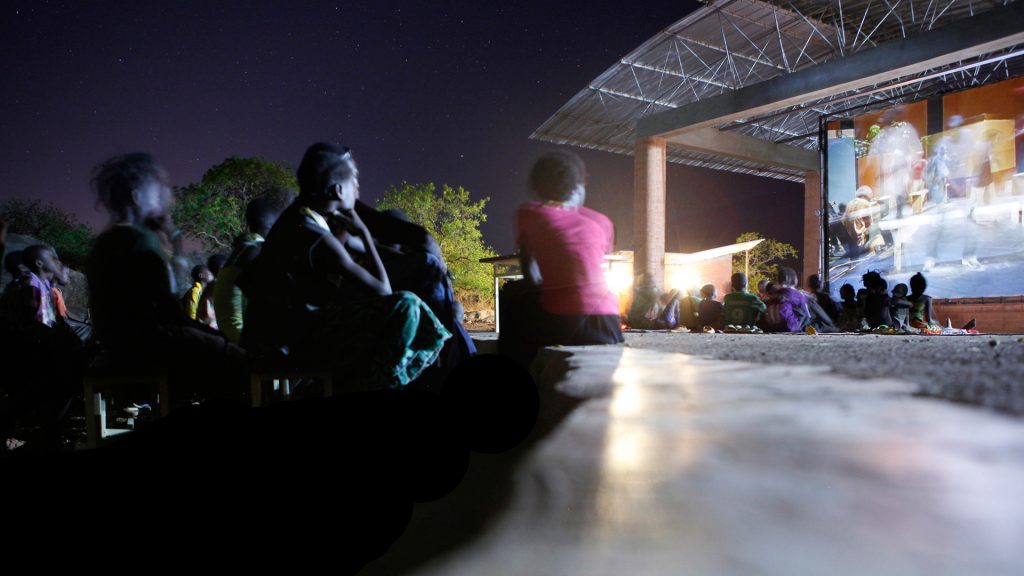 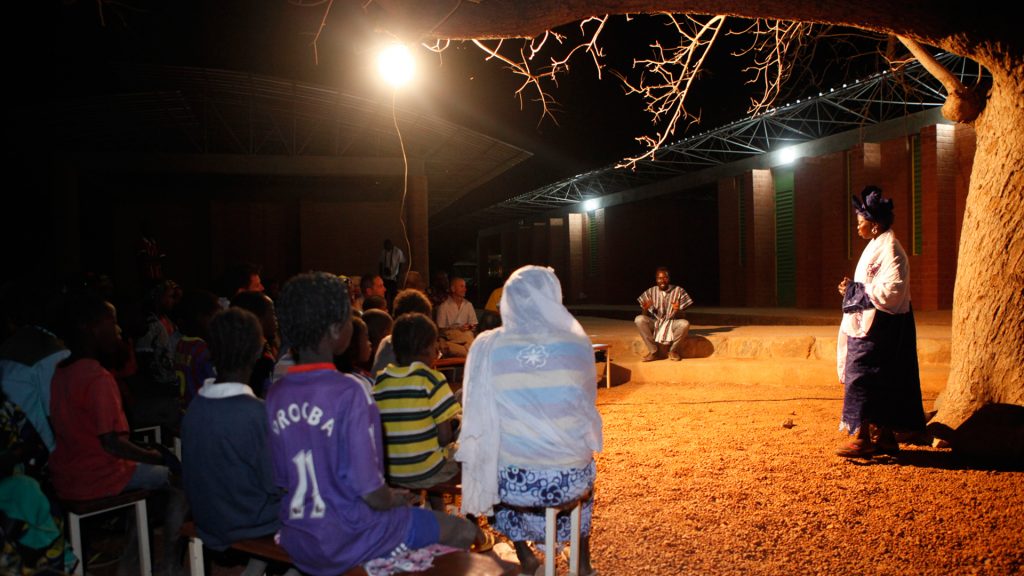 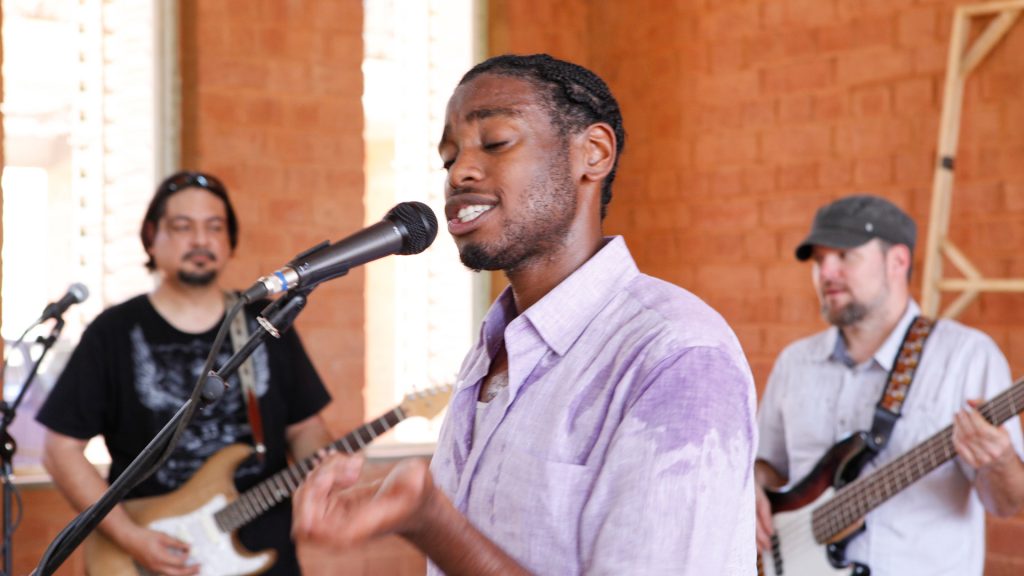 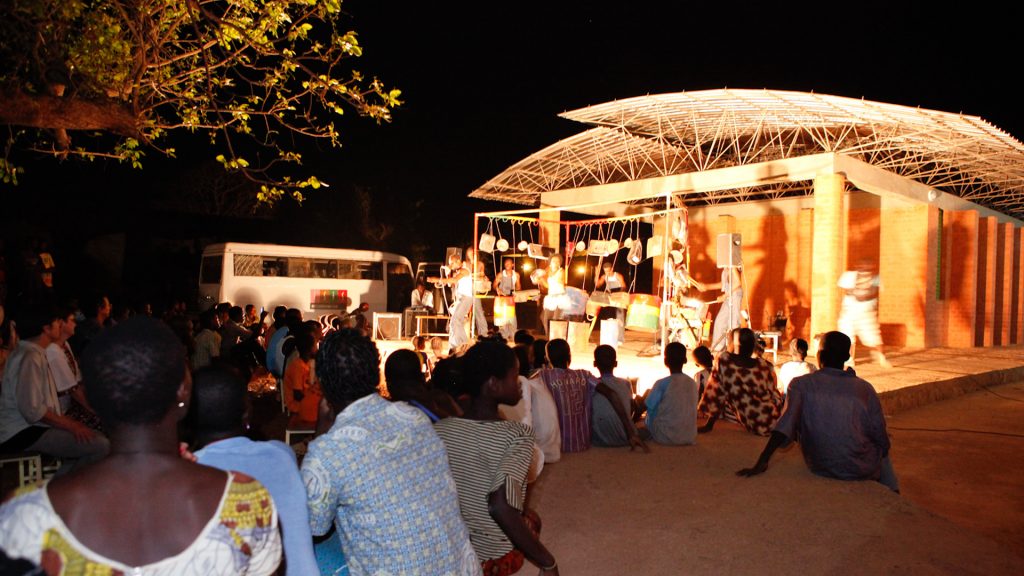 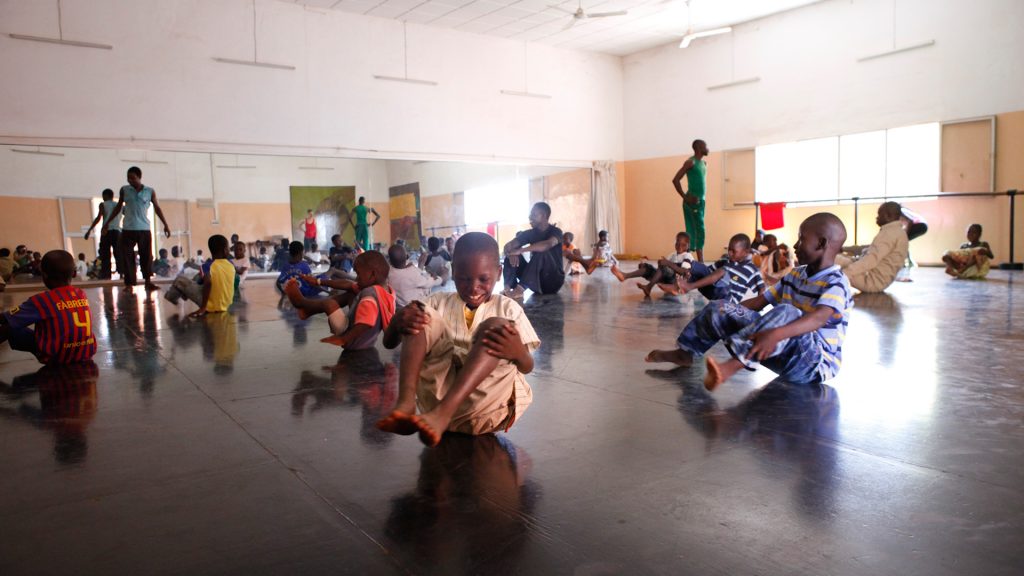 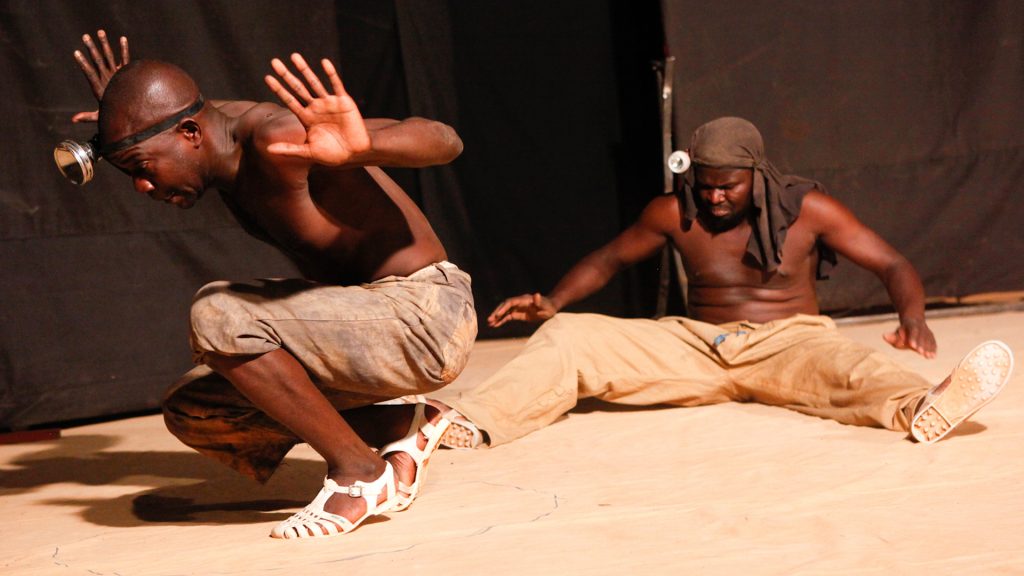 The significance of art and its anchoring in everyday life were an important focus for Christoph Schlingensief and it was at the centre of his artistic thinking. In the case of his last project – Operndorf Afrika, his main concern along with the art, were the pillars of education and medical care.

Since 2012, an extensive cultural program, comprising of theatre and dance performances, film evenings and concerts, takes place at Operndorf Afrika. It is designed and organised, by the local program director Alex Moussa Sawadogo, in cooperation with cultural institutions and artists from Burkina Faso, as well as with the Goethe Institute. The events receive high attendance and regularly attract cultural professionals and interested people from the capital Ouagadougou, which is located about 30 kilometres away. In addition to the events, workshops for children and the youth are conducted in different art categories.

“What happens in the opera village is much nicer to look at, as this
aloof stuff in the art world. And what’s the point of an art that no longer grants access, is no longer accessible and also does not come out of itself? What is
in this case decisive is to fund an art platform, which will function as the basis for children and youth. We will learn again how creativity arises and develops.
This is the idea of the opera village.”
Christoph Schlingensief

The main focus of the
Operndorf Culture program

The first focus of the cultural program is to hold up to three or four cultural events in Operndorf Afrika for the general public of the region, on a monthly basis. This includes the presentation of important African films, the performance of relevant, contemporary theatre and dance guest performances, concerts or evenings with traditional storytellers.

A second focus of the artistic program design is the networking with the local art scene. Through the provision of the infrastructure of the Operndorf Afrika, comprising of artists’ houses, a recording studio and other studios, this is increasingly taking shape and as such enables the creation of a free creative space.

Building upon this idea, an international artist-in-Residence program was set-up in the Operndorf Afrika, in 2015: Learn more about it here.

In addition to its main focus, the cultural program at Operndorf Afrika also pursues the artistic orientation of the primary school, by supplementing it with an extracurricular material, in the form of music and art classes, a theatre group, a film class, and an alternating workshop with established artists. The Operndorf School is not a normal primary school in Burkina Faso, rather an artistic concept pursued in the classroom.

Changing program points are designed by the artistic director Alex Moussa Sawadogo and are in conjunction with national and international artists, offered on a monthly basis, to children, parents as well as neighbours of the Operndorf Afrika.

The FILM FESTIVAL FOR CHILDREN (KIFIFE) is a festival of discovery that aims to introduce African youth to the visual art of cinema. For four days, we offer a selection of films, documentaries, fiction, short films and animations in which the protagonists and directors are children and teenagers. Above all, the films aim to show the everyday reality of African children and teenagers. There are also artistic workshops that are available for learning and more in-depth cinema experience. The courses are animated by educational and cinematographic experts. At the FILM FESTIVAL FOR CHILDREN, we favour a more practical approach to cinema in preference to a purely theoretical apprenticeship. We offer children the opportunity to run a multi-talented business, and to venture freely, with the camera in hand and the eye behind the lens. Read more about the Festival here.

The budget for the culture programme is estimated to monthly amount to 1,000 Euro, from which workshops, events, as well as excursions of the children and youth of the Operndorf Afrika to befriended cultural institutions in Ouagadougou, is financed. The cultural program takes place each year, analogous to the school calendar, from October to the end of July. In the summer, the program pauses, just like the school.

“What is meant by Opera in this case? The place, the village, which we
want to build, is not there, so that it can later allow for arias to be sung or for a symphony orchestra to play. My conception of the Opera Village is always associated with the hope that we will together with the effort and the money from many people will create this organism, which develops a life of its own, through us and especially through the people who are there.”
Christoph Schlingensief