SCHILINGSENSIEF’S DREAM OF AN OPERA VILLAGE IS ALIVE 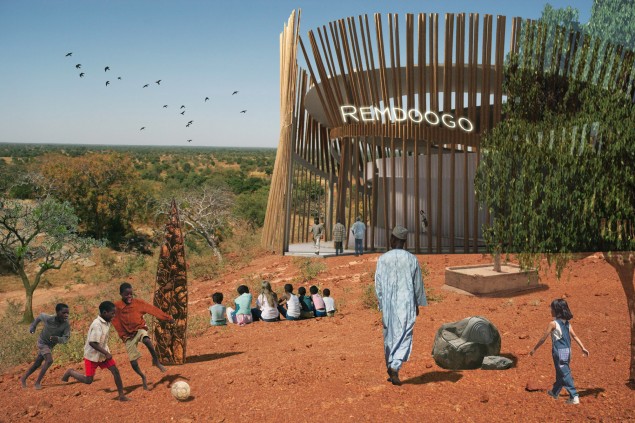 SCHILINGSENSIEF’S DREAM OF AN OPERA VILLAGE IS ALIVE

Before his death, the theatre director Christoph Schlingensief dreamed of an opera village in Burkina Faso. Ten years later, although the intended opera house itself is not yet there “Operndorf” is filled with life and art…. Article by Jan Ehlert for Deutschlandfunkkultur:

There is still no sign of an opera house in Christoph Schlingensief’s village in Burkina Faso. However, the existing stone buildings are wrapped in a circle around the central square that is intended for the opera house – for when the time is right and when the money is there.

Coordinator Sévérin Sobgo explains: “In the architecture, you will see that the village is like a snail. It is making slow progress, but it is reaching its goal.” On a visit, he told the ARD Studio Northwest Africa that it is a “ work in progress”.

Like other executives in the village, Sobgo speaks of the German theatre director Schlingensief as if he was there yesterday to personally explain his idea of ​​a centre of art in the middle of the bush. “It was always his guiding principle to create an opera house, but not in the sense of Richard Wagner, rather as a place for encounters and exchanges of cultures and people with different horizons,” said Sobgo.

That is why there are “artists in residence”, guest artists, and directors from abroad to give workshops in the opera village – constantly exchanging with their African colleagues. The children’s film festival is scheduled for March. It is advertised on flyers in the nearby capital.

From a high C to a primal scream

The total emptiness and plain nature of the surrounding scenery are confronted with high art. Schlingensief, who was already terminally ill at the time, was aware of this and was there during when the construction began ten years ago. “Our opera is a village,” he said, “an experimental village, yes. But please no foreign body in one of the poorest countries in the world. “The obvious things have to be created first: such as school buildings for up to now 300 children and a small clinic so that children can be born there. “It was always a small thought: You go to the opera village to maybe hear a singer and think that the high C is about to come and you suddenly hear the primal scream of a born child,” said Schlingensief.

The Dresden music lecturer Sylke Taubrich came to the village a few weeks ago as a volunteer and to take care of a group of children during the break. Whilst she is painting with the children, she says: “For me, it is the case that I am here for the first time and want to do something simple with the children first.” Later she might also want to do something musical.

Art as a path to self-confidence

The artistic focus changes something inside the children, observed school director Abdoulay Ouedrogo. “To be able to access your own sound and film studio, a stage for your own productions, painting and music: that definitely pays off”, says the teacher. “These children really have a plus that many children in Burkina, unfortunately, don’t experience. On the one hand, they are much more bright, and on the other hand, they learn something about the outside world, about the artistic disciplines. “So not only would it be easier for them to learn in class, but they could also express themselves better in their society,” says Ouedrogo.

Here art works as a path to self-confidence. There is also a warm meal every day. The state of Burkina Faso pays the staff, reports the Opendorf management in Berlin. Donors pay for the cultural program and the art – the sum is less than half a million euros a year. People are concerned about security in Burkina Faso, but the terrorist crisis of the north has not yet reached the area of ​​the capital. Hundreds of dead, almost 600,000 displaced, say MSF. In Schlingensief’s opera village 300 kilometres south, there is little to be felt. But, as the management in Berlin says, we should keep a very close eye on the situation.